Prime Numbers
*Are numbers that cannot be divided evenly by any other number than the number 1. Examples: 2, 3, 5, 7, 11, & 13 are all Prime numbers. Not all prime numbers are odd and not all odd numbers are prime.

Divisibility Rules are shortcuts to find out if the number can be divided evenly by another number without having to do the whole division problem each time. If you learn and use these rules you will save yourself time in all areas of math. 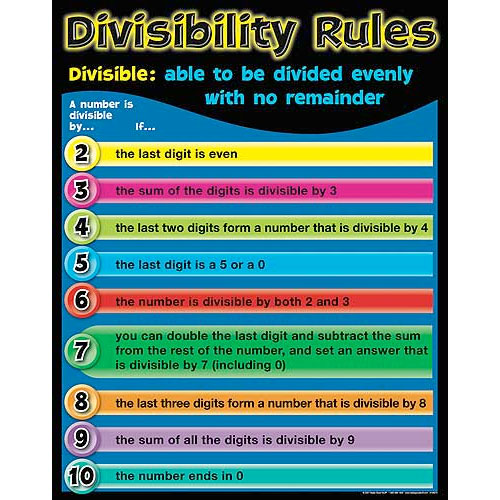 Greatest Common Factor
*Code Name -  GCF
* The GREATEST (biggest) factor that is shared by a set of numbers.
* We find this by listing the factors of each number in the set and then comparing.
*In class, we have learned the Ladder Method. Here is a video explaining this method.
*Another method is to use the "Factor Tree" and then list each of the factors. After listing, compare what is in common. Then multiply the factors that are in common with each of the numbers in the set. (Tip: Only the factors that EVERY number in the set has in common gets multiplied). This result is the GCF!
Example: 10 is the GCF of 20 and 35 because 10 is the largest factor that is shared by 20 and 35.
Least Common Multiple
+Code Name: LCM
+The Least Common Multiple is the SMALLEST ﻿Multiple﻿ of a set of numbers.
+ A Multiple is a number that contains another number an integral number of times without a remainder: 12 is a multiple of 3.
+ A method of finding the LCM is to list the multiples of each number in the set and compare. The largest multiple that is shared by EVERY number in the set is the LCM.
Distributive Property using GCF
We can rewrite an addition problem as the sum of two numbers with their greatest common factor as a common multiplier. It sounds way more confusing than it really is.

How do you do it? Start with an addition problem like Somenumber + Someothernumber = ?
Find the GCF of the set of numbers in the problem. This GCF will be the number on the outside of the parenthesis of the new expression. Next, use the quotient of the GCF and the original number as the number on the inside of the parenthesis. Do this for each of the original numbers. Your new expression should look like ////// TheGCF ( somenewnumber + someothernewnumber ) .

Click on the following link to watch the Learnzillion Video! https://learnzillion.com/assignments/V5K9APG 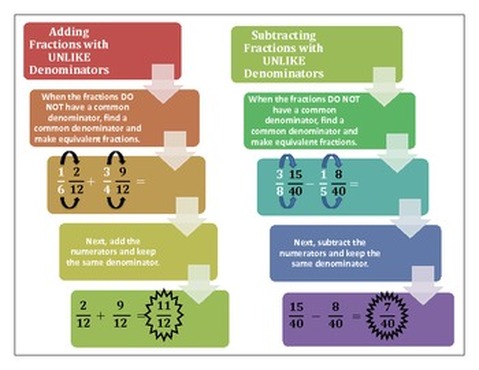 Subtracting Fractions: We use the same process for subtracting fractions that we used for adding fractions, except in the last step we subtract the numerators instead of adding them. 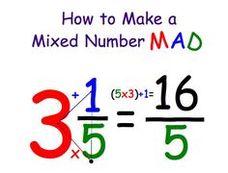